A Few Of My Favourite Things, A Perspective On 2019 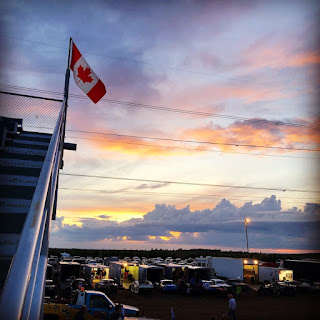 Contrary to what some might say, dreaming is a good thing. It sometimes leads to goals which, if pursued, can result in some pretty amazing achievements.

Let's look at a few of the people, and moments, that made dreams happen in 2019.

A favourite story from this season came from LAPS4MD, who helped a young fellow attend a NASCAR Pinty's Series race this past Summer. Joshua, who has Duchenne Muscular Dystrophy, got the VIP treatment during the tour's Western Canadian swing to Edmonton International Raceway. He had the opportunity to visit with the drivers in the pits after the races were over and really enjoyed his experience.

It's through the efforts of the racing community and LAPS4MD that stories like this can be told.

Be sure to check out Joshua VS Duchenne on Instagram. There you will see not only his photos and videos from that event, but his life story living with MD.

As an added note, please be sure to check out and subscribe to the Joshua VS Duchenne YouTube Channel.

I want to salute the many drivers from not only Saskatchewan, but across North America who support this cause. A growing number of racers from various motorsports disciplines are displaying the LAPS4MD sticker. They are not only raising funds, but awareness, and doing something meaningful for the benefit of others.

Not a CFL reference this time. Winnipeg, Manitoba's own Thomas Kennedy won the 2019 Midwest Power Series championship on the final scheduled night of racing over fellow competitor, Lee Grosz of Harwood, ND.

Although I've been quiet on the subject, no one has impressed me more with their advancement in the dirt track racing scene in 2019 than Headingley, Manitoba's Ricky Weiss. During his local racing days at Red River Co-op Speedway, he would jump into almost any race car class and drive his way to the front. From Super Trucks to Late Models and everything in between, Weiss has found success.

His WISSOTA regional and national championship runs were highly ambitious, with plenty of highway mileage piled on, but the results spoke volumes about Ricky's future goals in racing.

The Memorial event is a tribute to John Seitz, a 3-time NLRA Late Model series champion and 2001 series tour champion, who passed away in 2007 at the age of 36. Seitz was involved with the group, serving as competition director as well as being involved in NLRA charity events.

LAKE OF THE WOODS SPEEDWAY

I paid my first visit to Kenora, Ontario's Lake of the Woods Speedway on Terry Fox weekend. Nestled in the beautiful scenery of the Canadian Shield, this smooth 3/8 mile, low-banked dirt track takes finesse to be successful. The track challenges a driver's racing skills to a greater degree.

A work in progress, Anthony Leek has done a fantastic job with the speedway. On this weekend, the track hosted a standing-room only crowd of approximately 750 fans. Smaller scale, but it reminded me of the crowd that invaded Winnipeg's Victory Lane Speedway for the Mid-Canada Sprint Car Challenge race in 2005. The grandstands were overflowing with people. It was a sight to behold and definitely a "Wow" moment.

Over the years, Anthony and I had conversations about his dream of running a speedway. His dream is now a reality. Moving forward, it will just keep getting better. He is passionate about this project, and it is beautiful.

I've become a fan of regional blogger, Amanda Jo Enright. Amanda has been blogging for a little over a year now. She writes about her race night adventures with her family, and primarily about the NOSA sprint cars. Her writing struck a chord with me because it's similar to how I got started writing as well. She not only talks about what she sees on the track, but her family's interaction with the drivers on race nights. It's refreshing to read and I believe the racing community will benefit from this kind of writing. I look forward to watching her evolve as a writer and see where it leads her in the future.

Living the Dirt Life with Amanda is currently available on Facebook only.

Despite early struggles, Hartford, South Dakota's I-90 Speedway finally was able to run some Saturday night programs. Congratulations to track manager Hot Rod Pattison and his hard-working crew for their perseverance and dedication each and every week, whether they raced or not. Sioux Falls area dirt track racing is back in business and I'm looking forward to traveling down there to watch some in the future.

Estevan, Saskatchewan's Kyle Fedyk had to wait until Labour Day to claim his first CAOSS win of the season and 2nd consecutive Tyler Fedyk Memorial victory at Nodak Speedway. The Canadian-American Outlaw Sprintcar Series had a limited schedule in 2019. Hopefully their 2020 schedule will expand to include a return to Estevan Motor Speedway.

It's always great to see a new driver enter the fold. Raphael Kurek raced with CAOSS at the season ender in Minot and is reportedly planning on running with the group in 2020.

Ginga Ninja Dirt Promotions Ltd is doing great work organizing and giving dirt track racing a greater profile at Edmonton's Castrol Raceway. Since taking over the operations and promotions of the dirt track, both the car counts and the fan base have increased.

Speaking of Castrol Raceway... Leduc, Alberta's Skylar Gee was making his presence known south of the border with the All Star Circuit of Champions series in 2019. To his credit, Gee scored his first ASCoC feature win on August 24 at Abbottstown, Pennsylvania's Lincoln Speedway. He also finished 7th in series points.

Past racing acheivements for Skylar Gee has included winning the 2015 Gold Cup at Castrol Raceway. In 2017, he was named the Lucas Oil American Sprint Car Series (ASCS) National Rookie of the Year.

Recent news of Traditional Sprint Cars starting up in Central North Dakota has the region buzzing. The new class will follow the rules of the very successful Upper Midwest Sprint Car Series. The selling point for racers of this open wheel class is affordability. In an age where cost is important to whether a car is on the track and racing or parked, these sprint cars may just be the right fit for budget-minded weekend dirt track warriors.

To say that I am excited for Traditional Sprint Cars in our region would be an understatement. The potential for growth and possibilities for events featuring this class appears to be very promising.

Before signing off, I'd like to thank everyone who took a little time out of their busy day to read Dirt from the Stands.

Thanks to those who shared a post, commented or offered kind words of encouragement.

Special thanks to my family who has supported me on this dirt track racing journey and to my racing family, whose friendship I value more than anyone will ever know.

2019 marked my third year back at the dirt tracks, and I believe I have finally found my purpose again. Perhaps I've slowed down a touch, but I'm certainly as enthusiastic about the prospects of next season as I've ever been.

Watching a beautiful sunset on race night is a very peaceful experience. I was blessed to enjoy a few of those at Estevan Motor Speedway this year. God-willing, I hope to enjoy a few more across Western Canada next season.

The living skies of Saskatchewan gives one a feeling of comfort, and with that comes a sense of belonging to something much bigger than any one of us.

So as we close out 2019 and wait in anticipation of the coming year, let us take some time to relax, reflect, dream a little and enjoy the upcoming holiday season. 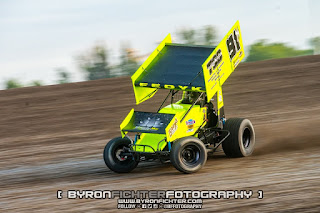 Despite running a limited schedule in 2019, Fedyk was clearly ready for this night. The results played out in similar fashion to last year's win, but also with a little additional luck on his side. The luck part came in the way of a shredded left rear tire by the challenging 6N sprint car of Greg Nikitenko near the end of the 25-lap A Main.

"Well, sometimes it's better to be lucky than good", commented Fedyk. "Our car was really good, but Greg was definitely better."

As in 2018, Kyle won his heat race and then, starting from the front row, went on to win the feature.

Until next time race fans, take care and good racing. 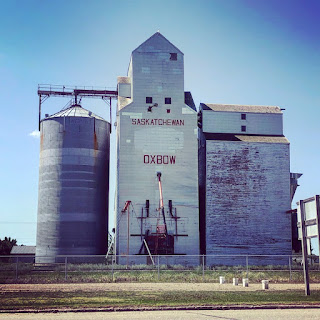 Something a little different this time.

While traveling from Winnipeg to destinations West or East and back, I made a few observations which I would like to share.

I constantly hear complaints from people, especially fellow Manitobans, about how flat and boring the province of Saskatchewan is to drive through. I paid special attention to the landscape while driving along the Trans-Canada highway between Saskatchewan and Manitoba this year. I can confirm that there is very little difference between the two provinces.

In fact, I found Manitoba to be more flat and boring a drive than Saskatchewan. If you don't believe me, try driving from Brandon towards Winnipeg and tell me differently.

The end of racing season also means that the annual grain harvest is in full swing. Maybe it's because of my long-time relationship with the farming community, but I love this time of year. Whether a crop is waiting to be combined, laying in swath or already in stubble, it's beautiful golden colours against the greenery of the countryside is pleasing to see. God Bless the producers who work so hard to help feed us all.

On a similar note, I have an affinity for grain elevators. The prairies are littered with these symbolic structures of our agricultural community and I'm always on the lookout for them.

Ever since I was a youngster, I have always enjoyed watching thunderstorms. Granted, they are not conducive to a night at the speedway. There is, however, something almost poetic about a thunderstorm on the Canadian prairies.

Any weekend that I've driven through the town of Carnduff, Saskatchewan, I always see corralled horses. Upon further investigation, it turns out that Carnduff is big into the Quarter Horse business. It's always fun to see them when we travel along Provincial Highway 18 towards Estevan. You learn something new every day.

Heading in an easterly direction, I had forgotten how nice the drive to Kenora was until this year. The Canadian Shield is an amazing sight and truly one of the more beautiful landscapes of our great country. If it wasn't for Lake of the Woods Speedway, I'm not sure when I would have travelled in an Eastward direction again, but I'll definitely make a return trip sooner than later.

Just when you think you've found the perfect accommodations for your travel needs, another place will appear on your radar that is close in price and just a little bit nicer. Bet on it.

Next up, a few of my favourite things about the 2019 racing season.

Until then race fans, take care and good racing. 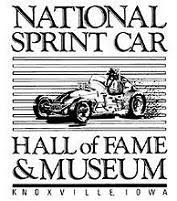 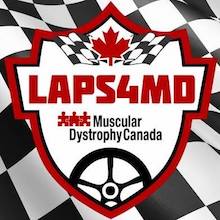